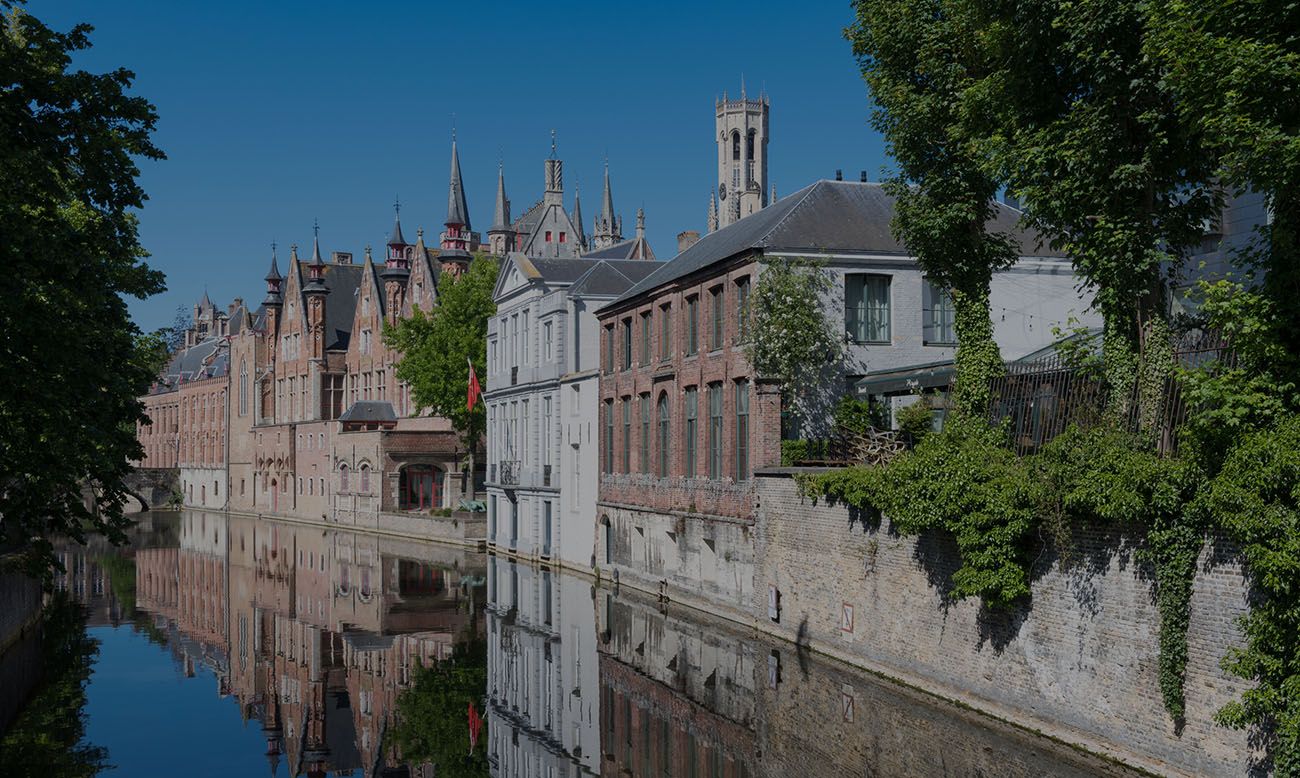 Bruges is a beautiful medieval city situated in the North of Belgium, in Flanders. Tourists from around the world marvel at the UNESCO city and former European Capital of Culture.

Bruges is called ‘the Venice of the North’. This splendid medieval city is one of Belgium’s crown jewels. In no other European city the feel and the look of medieval times are so present as here in this city close to the North Sea.

Bruges is called Brugge by its native Dutch language name which assumedly used to signify landing stage. It is the capital of the province of West Flanders in present-day Flanders, the Flemish Region of Belgium. It is one of Europe’s most important landmarks as the city has hardly changed since the Middle Ages.

Very few traces of human activity date from the Pre-Roman Gaul era. The first fortifications were built after Julius Caesar’s conquest of the Menapii in the 1st century BC to protect the coastal area against pirates. The Franks took over the whole region from the Romans around the 4th century and administered it as the Pagus Flandrensis. The Viking incursions of the 9th century prompted Baldwin I, Count of Flanders to reinforce the Roman fortifications; trade soon resumed with England and Scandinavia. It is at around this time that coins appeared bearing for the first time the name Bryggia, a name that may have the same origin as Norway’s Bryggen.

Bruges received its city charter on 27 July 1128 and built itself new walls and canals. Since about 1050, gradual silting had caused the city to lose its direct access to the sea. A storm in 1134, however, re-established this access, through the creation of a natural channel at the Zwin. The new sea arm stretched all the way to Damme, a city that became the commercial outpost for Bruges.

With the reawakening of town life in the twelfth century, a wool market, a woollens weaving industry, and the market for cloth all profited from the shelter of city walls, where surpluses could be safely accumulated under the patronage of the counts of Flanders. Bruges was already included in the circuit of the Flemish cloth fairs at the beginning of the thirteenth century. The city’s entrepreneurs reached out to make economic colonies of England and Scotland’s wool-producing districts. English contacts brought Normandy grain and Gascon wines. Hanseatic ships filled the harbour, which had to be expanded beyond Damme to Sluis to accommodate the new cog-ships. In 1277, the first merchant fleet from Genoa appeared in the port of Bruges, first of the merchant colony that made Bruges the main link to the trade of the Mediterranean. This development opened not only the trade in spices from the Levant, but also advanced commercial and financial techniques and a flood of capital that soon took over the banking of Bruges. The Bourse opened in 1309 and developed into the most sophisticated money market of the Low Countries in the fourteenth century. By the time Venetian galleys first appeared, in 1314, they were latecomers.

Such wealth gave rise to social upheavals, which were for the most part harshly contained. In 1302, however, the population joined forces with the Count of Flanders against the French, culminating in the victory at the Battle of the Golden Spurs, fought near Kortrijk on July 11. The statue of Jan Breydel and Pieter de Coninc, the leaders of the uprising, can still be seen on the central market.

In the 15th century, Philip the Good, duke of Burgundy set up court in Bruges, as well as Brussels and Lille, attracting a number of artists, bankers, and other prominent personalities from all over Europe. The new Flemish-school, oil-painting techniques gained world renown. The first book in English ever printed was published in Bruges by William Caxton. This is also the time when Edward IV and Richard III of England spent time in exile here. The population swelled to more than 40,000 inhabitants.

Starting around 1500, the Zwin channel, which had given the city its prosperity, also started silting. The city soon fell behind Antwerp as the economic flagship of the Low Countries. During the 17th century, the lace industry took off and various efforts to bring back the glorious past were taken. The maritime infrastructure was modernised, and new connections with the sea were built, but without much success. Bruges became impoverished and gradually disappeared from the picture. George Rodenbach even named the sleepy city Bruges-la-Morte meaning Bruges-the-dead. In the last half of the 19th century Brugge became one of the world’s first tourist destinations attracting wealthy British and French tourists. Only in the second half of the twentieth century has the city started to reclaim some of its past glory. The port of Zeebrugge, originally built by the Germans for their U-boats in World War I, was greatly expanded in the 1970s and early 1980s. International tourism has boomed and new efforts have resulted in Bruges being designated ‘cultural capital of Europe’ in 2002.

Today’s Bruges has a population of about 45,000 people (the old centre) or 120,000 people (centre together with the suburbs). These numbers clearly show that Bruges is not a tiny miniature city. It ranks, even today, among the important cities of Belgium. It is also the capital of the Belgian province of West-Flanders. A lot of people take day-trips from Brussels to Bruges, but there is too much to see here to fill only 1 day. The best way to visit Bruges is to spend at least one night in one of the many beautiful and cosy hotels. Later in the evening, when all the tourists have gone, Bruges finds back its charm and quiet of old times. When one is lucky with the weather, a stroll through the tiny medieval streets can be an enchanting experience. Bruges is always beautiful, in the summertime as well as in the wintertime. Lucky visitors will never forget the city after they have seen it on a snowy December or January day.

Bruges is unique, in the sense that here the town authorities have done the utmost to preserve the medieval-looking image of the city. Of course, not every stone in Bruges has come to us straight from the Middle-Ages. The 19th century neo-gothic style is more present than one should think. Because of these 19th century renovations, some critics have put Bruges down as a ‘fake’ medieval city. Nevertheless, the combination of old, not so old and new fascinates everyone who first sets foot in Bruges.

More information on Bruges on www.visitbruges.be

THE COLLEGE OF EUROPE

The College of Europe is characterised by its academic independence, its bilingualism, the diversity of its teaching staff and its multicultural environment, which together create a genuine European “microcosm”.

The College of Europe was the world’s first university institute of postgraduate studies and training in European affairs, and remains unique and innovative to this day. The College’s origins date back to the 1948 Hague Congress when Salvador de Madariaga, a Spanish statesman, thinker and writer in exile, proposed the establishment of a College where university graduates from many different countries could study and live together.

A group of Bruges citizens led by the Reverend Father Karel Verleye were successful in attracting the College to Bruges and Professor Hendrik Brugmans, one of the intellectual leaders of the European Movement at the time, became the first Rector of the College of Europe (1950-1972). In the wake of the changes in Central and Eastern Europe following the fall of Communism, at the invitation of the Polish government and with the support of the European Union, a second campus was opened in Natolin (Warsaw) in 1994. The College now operates as ‘one College – two campuses’ and what was once referred to as the “esprit de Bruges”, is now known as the “esprit du College”.

The College’s residential life is a vital component of the student experience. By living in student residences, students from across Europe and beyond live and work together, in the classroom, in the residences, and in the College as a whole. The intensity of this personal experience and interaction ensures that students become familiar with the full cultural and social diversity of Europe and learn how to operate in an international environment.

We use cookies on our website to give you the most relevant experience by remembering your preferences and repeat visits. By clicking “Accept All”, you consent to the use of ALL the cookies. However, you may visit "Cookie Settings" to provide a controlled consent.
Cookie SettingsAccept All
Manage consent

This website uses cookies to improve your experience while you navigate through the website. Out of these, the cookies that are categorized as necessary are stored on your browser as they are essential for the working of basic functionalities of the website. We also use third-party cookies that help us analyze and understand how you use this website. These cookies will be stored in your browser only with your consent. You also have the option to opt-out of these cookies. But opting out of some of these cookies may affect your browsing experience.
Necessary Always Enabled
Necessary cookies are absolutely essential for the website to function properly. These cookies ensure basic functionalities and security features of the website, anonymously.
Functional
Functional cookies help to perform certain functionalities like sharing the content of the website on social media platforms, collect feedbacks, and other third-party features.
Performance
Performance cookies are used to understand and analyze the key performance indexes of the website which helps in delivering a better user experience for the visitors.
Analytics
Analytical cookies are used to understand how visitors interact with the website. These cookies help provide information on metrics the number of visitors, bounce rate, traffic source, etc.
SAVE & ACCEPT
X